Skip to primary content
Skip to secondary content
Tired.. very tired.. my feet must be ten times their size. :)) Great shows today, starting with Holograf, which I couldn`t quite see from the beginning to the end, because we were watching Simona painting her T-shirt. She had one with ‘I love life’ .. and she wrote on the back ‘& blood’, and then Claudia`s hand was hall marked on the shirt, after she previously painted her hand with red. The T-shirt looks awesome ! Anyway, after Holograf, guess who brought the barrels ? :) 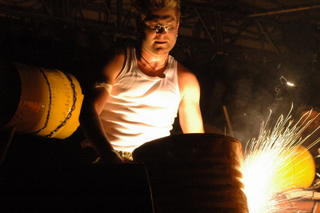 Oh yeah baby. :) Sistem. Great great show. I couldn`t believe my ears.. it was live, all accept the voice. Well, they couldn`t bring all the ladies they sang with, now could they ? Those barrels can actually .. sing. :))))) Lovely. Lovely muscles, as well. :P By the way, one guy from Sistem actually was there, watching us painting the T-shirt. Didn`t recognize him. Dammit !
Before Parazitii, we were sitting on the dike. I was sittin` next to Crini, then Adim showed up. Two minutes later, a guy with glasses, dressed like.. oh what`s the use ? He looked like an actual geek. Crini looked at me. I looked at Crini. She said : ‘Well, he looks… smart.’ After two seconds, we were laughing our brains out.. :))))))))))))))))) Aahahahahahhahahahahahahahaha.. I`m still laughin`. :))))) This is the second most phunny subtle ( or .. not ) thing that happened at the festival.
Parazitii. The gang were playin` ping pong, so… what the hell, I went to see Parazitii. Best decision.

These guys were fabulous ! They`re the only rap band I like, because unlike the others, their lyrics are smart. And live they sound.. well, I`m speechless again. I was out there, near the stage, alone, but who cared ? :))))

Oh my.. oh myyyyyyyy.. I mean… I`m speechless. We got a little late, but we still got ourselves a place right in front of Iris playing.. Cristi Minculescu is so dead ! I mean.. take a look at his belly and you`ll realise what alcohol does to people. Oh and, better take a look at this picture too, you never know which will be the last Iris concert you`re gonna go to. Unfortunately. 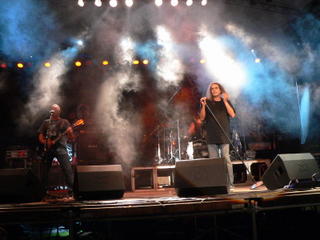 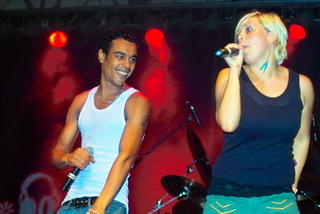 I only knew ‘Push Up’, I had no idea how great they can be live. Or how good their songs are. Man, I was so fuckin` impressed. Too bad we couldn`t make fuckin` noise in public, that`s what the blonde was always asking for.. ahahaha :))) Nimpho ! 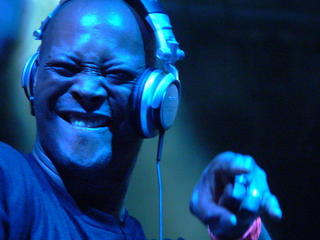 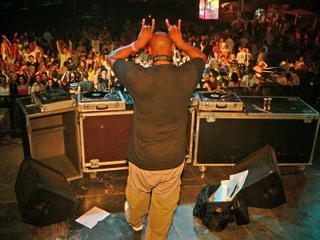 ..Aaaaand the guy up there is DJ Rush from USA. Man, his beat rulled. I mean, Adim was with Claudia and Bogdan with Simona, and only Crin` and I .. again, enjoyed it. :) We wanted to give some space to the lovebirds. I whined a bit when the girls wanted to go home. They couldn`t believe I still had that much energy.. Simona even called me ‘Duracell’… I last longer.. ahahahahaha :))))))) Well, Claudia did say the age difference is noticeable at this point. :) I`m proud ! :)))))))

Can`t call it sadness, it was more like a gloomy atmosphere all day long, and not because every part of us was aching from the night before, but… well, let me tell you.
Cristi Niculescu from Directia 5 was walking around around the stage when we got there, so Crin` and I went and asked for an autograph… franky, we couldn`t care less, but we just wanted to make phun of the situation… I don`t even know where that paper is right now.. if it still exists. :)))))) Altar started singing. This is the band`s vocalist :

Hm… that day, before the show, I met Claudia, the one Crini was telling me about for two years. She was with us that day. Well, the three bitches left me all alone in the crowd when Altar were performing. Their style was a bit too tough for them.. Then Bogdan and Adim showed up and the pogo started. Adim was sure that I couldn`t resist some pogo and that I didn`t go with the girls. :) He was damn right, `coz no matter how rusty I was feeling, I still savagely shook my head. :)

Vama Veche… I was again in front of the stage, but with Claudia and Simona only. Crini and her mice, Adi, were somewhere behind, but still enjoying the great show Vama Veche performed. Still, the band was feeling low, everyone could notice that, especially after they sang a new song, ‘Zmeu’ ( Kite ).

That`s Tudor Chirila, the vocalist. He`s uhm… intelligent, clever, and a very special person… You can see how unique he is in the band`s songs and lyrics.. he`s fabulous, I like him a lot. Well, during the concert I`ve officially found out something that surprisingly… didn`t surprise me. :) And there, singing ‘Hotel Cishmigiu’, spitting my lungs out, I decided that 2 years are enough. I`ll move on and forget. For real this time. Because this is a real reason.

Oh my Goooood, this was awesome ! The first day, the best day.. everyone just exploded.. the energy was floating in the air, even if there were not as many people as I`ve expected.. at least not in the first day. I was there with Crini and Simona, but there we came across Adim and Bogdan, the famous lawyer Adim was always talking about, the smart and well-read one, the two-legged encyclopeadia. I was definitely not in the mood for any kind of intelligent talking at the festival, and Crini either, at least not with him, so it was clear in our minds ( even if we didn`t discuss it ) that the lawyer was reserved for Simona and we had to do anything in our powers for something to happen between those two.. starting with keeping our mouths closed. No intelligent lines, no brilliant ideas, no nothing. :) I did so, I only smiled and looked away, lost somewhere in between voids, but Crini couldn`t help herself sometimes. :)))))))) I adore my plant.
Aaaanyway, I met Simona`s little Hungarian cousins, and the girl was always asking her why my nails are black… ahahahahahha :)))) Simona`s mom was great, I simply adore her.. she told us about ‘this one time’ when she hit two old ladies with the car during winter time. Aw man… that sucked big time. :) Well, we went then to see some concerts.. starting with Voltaj. Well, they don`t really play rock… that`s more like… pop-rock or something, but they absolutely rule ! I mean, that was one hell of a show. See for yourself : 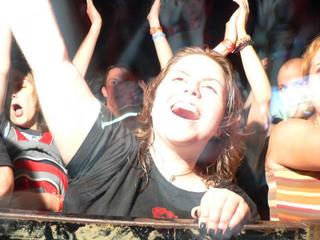 Oh yeah, that`s me.. :)))))))) I was sweating my ass out, there were 33 degrees Celsius outside. Even Calin Goia from Voltaj was sweating on the stage. After Voltaj, we danced on the music played by a DJ, can`t remember his name, and when Suie Paparude started talking more than singing, we took a break and sat at the bottom of the dike, with Adim and Bogdan. Mariusica and the duck showed up, but duck was really keen on going home when he saw Adim. That wasn`t even theatre, it was phuckin` circus.. but hey, we were supposed to have phun, so we all went ( including Mariusica ) to a terrace where good heavy metal was playin` and everyone was doing the pogo. WE ABSOLUTELY ROCKED ! No need to say more. :) We were beasts, we were like animals, I mean.. like all the animals dancing there.. :)))) My poor neck.. I couldn`t even keep my head up at the end of the day.. too much pressure on those muscles, with absolutely no training.
I liked these guys from Hungary, Tunderground… they sing something between rock and Faithless.. weird combination, I know, but they just made me close my eyes and float… They were fantastic !
A bath and a good sleep, and let`s go on with the second day. >:)
Again, this year we`re honored to have in town for five days ( 27 – 31 July ) in our city the Peninsula Festival ( the equivalent of Felsziget in Hungary ). Everything will take place, like in the past two years, in the Weekend complex precinct, where we shall enjoy lotsa bands, including the total surprise of this year : Apocalyptica. We should only be concerned about the fact that more than 40.000 people are coming, not only from Romania, and there`s absolutely not enough space for everyone. I bet I`ll have lotsa fun, being so small, in that overcrowded place.. :) Oh well, I`ll manage somehow. Here is a plan. The stages and webcams are marked, for those of you who won`t be going, or for the ones that need directions.

Anyway, here`s a list of other bands, beside Apocalyptica, that will make your five nights a heaven :
1. Anima Sound System from Hungary ( one of their songs appeared on the Buddha Bar compilation.. I think they`re ok. )
2. B.U.G. Mafia
3. Dana
4. Directia 5
5. DJ Rush ( from USA )
6. DJ Goldie ( England )
7. Freestylers ( England )
8. Hi-Q
9. Holograf
10. Iris ( oh yeah )
11. Luna Amara ( great live shows ! )
12. Parazitii
13. Sarmalele Reci
14. Sistem
15. Spitalul de Urgentza
16. Talisman ( oh c`mon :/ )
17. Vama Veche ( wheeeeee )
18. Voltaj ( great live shows as well )
19. Zdob & Zdub ( let`s hope it rains, then the beasts will reveal :)) )
20. Suie Paparude ( respect ! )
Sounds promising, isn`t it ? :) `morrow I`ll be joining Crini to Cafe Tutun, to make sure she buys a ticket. We just can`t wait. Just can`t. And I`m sure no one will regret this. I`ll post impressions after the festival. What else can I say ? Don`t expect me to be alive for five days. Don`t expect me to have anything in common with reality for five days. See you after the POOOOOGGGGGOOOOOOO ! :))))
Reading the news today, I found this article :
” Taking regular showers could lead to brain damage, according to a new study.
Scientists believe breathing in small amounts of manganese dissolved in the water may harm the nervous system. Dr. John Spangler, from Wake Forest University School of Medicine in New Carolina, who led the study, said: “If our results are confirmed, they could have profound implications for the nation and the world. Inhaling manganese, rather than eating or drinking it, is far more efficient at delivering manganese to the brain. The nerve cells involved in smell are a direct pathway for toxins to enter the brain. Once inside these small nerves, manganese can travel throughout the brain.”
Dr. Spangler’s team calculated from animal studies the amount of manganese people would absorb by showering for 10 minutes a day. After 10 years of showering in manganese-contaminated water, children would be exposed to levels of the metal three times higher than the doses needed to leave deposits in rats’ brains. Adults with a longer history of showering could be exposed to doses 50% higher. “
So now what ? Let`s all stink like Al Bundy ! Honestly, I prefer to be brain damaged for the rest of my life than having flies `round my head wherever I walk. Scientists are really gettin` bored. :)