Skip to primary content
Skip to secondary content
Yesterday I was laughin` my freakin` brains out.. The author is Andrew ( or Endriu, or Andrei, or.. the future guitarist from Nuclear Fist ( =))))) ), or just our ( mine, plant`s and Old`s ) friend from Mallorca..
1. Q : What`s small, black and goin` fast ?
A : Roxa in rapid mode heading to Bucharest for the concert.
2. Q : Why is Roxa going to Bucharest ?
A : `Coz the paradise is lost.
3. Q : Why is Roxa going to Bucharest ?
A : Because the moon is bitter.
Aaaaahahahahaha :))))

Soooo.. today is tomorrow ( that sounds stupid.. ) and I`m gonna put down the story of my trip to Bucharest.. hope it doesn`t come out too long, as I have some kind of special talent to write, write, write and never stop..
Woke up somewhere between 5 and 5:30 AM ( naughty, after 5 hours of sleep ), and went to get Mariusica, together with my dad. It was a long trip, took us about 5 hours, 5 hours and a half to get in the suburbs of Bucharest. Then dad delivered some glasses, he did a favour to Degeu, my ‘uncle’. Oh, forgot to tell you about the money.. I only had 100 RON, and the road costed me and Mariusica 140 RON, so that meant 70 – 70.. well, when we got out of town, I gave my dad 80 RON for gas. He kept that in mind when we got to SIAB and I handed him 10 RON for the entrance ticket. He refused them… :))) Oh well, that left me with 20 RON in my pocket.
Aaaanyway, Bucharest is.. pfff, challenging. Mentally, physically, take any domain.. it is fuckin` challenging. It`s not as monochrome as Tg. Mures, but it`s still too gray for a capital city, in my opinion. It`s beautiful, not gorgeous, but amazingly beautiful. I`ve seen all kinds of buildings, famous buildings that I`ve been reading about or hearing at the news. Gone to visit my uncle to take a shower and eat, I met my aunt and cousin, and their dawg.. Ba. Aahahhaha.. :))))) I kept thinking about SpongeBob`s way of laughing : baAAAAaaaAAAAaaAAAAAAaaa :)))))))))))). Anyway, afterwards, we went to Romaero Baneasa for SIAB. Don`t kill me, Atika was the one who took the pictures, so if you want women, visit his site ( I`m never going anywhere only with men again !! :))) ); the pictures were taken with his expensive Canon Rebel XT, Sigma 18-125mm f3.5-5.6 DC.. bla bla.. :)))) I`m only gonna publish the ones with cars. :)

The great and beautiful Rolls Royce…

… and a race car.. lovely view. :) Those are the pictures with cars… Oh well, men… :/ :)
After SIAB, the main event was about to start, and I`m talkin` about the Paradise Lost concert. Got to the Romans Arenas, and well, I had an invitation, went to get it from some guy standing at this small gate. He sent me to this other guy at the big gate… and that one, eventually sent me to the right guy, the one on the other side of the big gate.. :)))) Nutz.. :) Conversation..
‘There you go, miss.. Tg. Mures ? You came straight from Tg. Mures ?!’
‘Uhm… yeah…’
‘Oh my… and where are you going to sleep ?’
‘I`m not goin` to sleep, I didn`t come here to sleep.’
:))))))) Bucharest people.. they sucked when Luna Amara sang.. or at least five drunk retards that kept swearing, yelling and shit.. I liked Nick`s reaction to that one : ‘This next song is for all of you.. let`s all try to get along and sing this chorus, no matter what type of rock we like to listen to.’ .. Poor Mihnea.. he thought he was jusy sayin` that to fraternize with the ones that listen to metal.. :))) I had to tell him he was wrong.. :) Well, talkin` about Nick, he was lookin` so straight into my eyes at the concert.. he doesn`t know how I look, but I think he liked the fact I knew the lyrics to their new songs.. but the whole situation was pretty fuckin` weird.. :)
Paradise Lost absolutely rock.. My nape still hurts from all the head banging.. Yes, there was pogo, some chick landed right at my feet, pushed by the morons doing the pogo.. :))))) She was about to get a kick in the ass, good thing Atika realised she was a… she. :)))) Going back to Paradise, they even sang some melodies from their `95 album, Draconian Times.. but the most impressive for me was ‘Over The Madness’ from 2005 Paradise Lost.. I don`t know, the guitar solo gives me the chills, at the concert I just closed my eyes and went free.. It was more than lovely.
All in all, the trip was a total success, even if I didn`t have the chance ( or luck.. because of what happened at the end of the concert in the park, while we were waiting for dad – the bass guitar player and the drumer were waiting for the rest.. ) to get to talk to Mihnea or Nick, mostly because I`m stupid, not to say chicken. :) The company was great, including my dad.. even if we were all sleepy on the way home. Now instead of thinkin` about school or my driver`s licence, all there can be in my head is the next concert : 25th of November.. Bucharest.. Rock Your Mind festival or some trip to Cluj. Oh and, I now have 50 RON, because of some money exchange with dad before the Paradise Lost concert.. one more month of walkin` to school and I can afford Cluj or Bucharest all over again. I love my life ! :)

Today a man lost his job because of me. And again, today I lost my freakin` minds because of that man. Let me tell you what this is all about.

Last month, I won ( well, ‘won’.. :D ) some Cornisha taxi tickets with Csabi`s help. Each ticket was worth 50 RON. Everything went nice and smooth with them, until today, when Ioana and I decided to go home with a cab.. I had this one last ticket left, so I called for a taxi and they sent me car number 21. :) Man, I`m not even sure if I can laugh or smile or react in some way about this. We got to our destination, and I handed out the ticket to the driver. Then, the ‘phun’ part has begun.
He said those tickets weren`t valid anymore, he even started yelling that we should have told him about them from the beginnin`, for him to reject the drive. Ioana simply freaked out, she was all red and she couldn`t say a word, lookin` desperate at me.. Oh yeah, we had no money except that freakin` ticket this guy refused to accept because they ‘weren`t valid anymore’. I was tryin` to convince him that he was making a big mistake, that it`s all written on the ticket : ‘September – October’, all in vain.. Until I started yellin` myself, for Ioana`s great amazement : ‘ If you demonstrate you`re right, I promise I`m gonna give you the money, sir.’ He eventually asked through the radio, and the answer was that we were right.. He didn`t say anything more.. we just got out of the car, I slamed the door and moved on..
Ioana was so proud of me.. she told me she liked the way I was talkin` in those moments of disorder in which she was completely disorientated. She even enjoyed my yelling and the slamming part.. :))))))
Oh well, the things is, when I got home, I just had to tell everything to _ADI_ and Csabi.. and guess what Csabi did ? Talked to the guy`s boss and told her all the story.. I was guaranteed that that stupid driver won`t be having the same job tomorrow.. I was like.. WHAAAAT ? That was not what I wanted, but.. he messed with the wrong person.. I`m a rocker, I`m one of Csabi`s best friends and.. my name is Roxa, I lose temper easily.. Really.. wrong fuckin` person to mess with. :)))
Guess what`s on Saturday ? 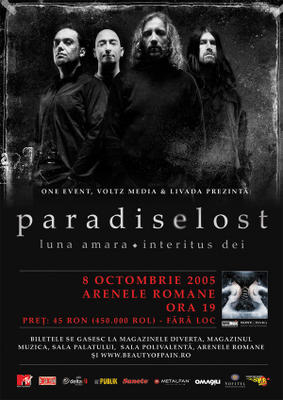 I`m going thanks to Nick from Luna Amara… ” Ooooh, I`m so stupid.. wanna come to Paradise Lost ? ” .. and that`s how I ‘won’ myself a ticket. :)) Well, the thing is that I`m going with Mariusica and Atika on the way back ( hopefully ), but at the concert we`ll stick together.

I CAN`T WAAAAAAIT ANY LONGER !!! I wanna sing and bang my head and pogo on Luna Amara and Paradise Lost.. Let the rebellion begin.. in this weekend !