Skip to primary content
Skip to secondary content
Here goes 2005`s review.
<< + >>
– got my driver licence
– got my Cambridge diploma ( CAE )
– my first article got published in EgoPHobia e-zine
– changed school, which turned out to be a good thing after all.. :)
– discovered rock music and all that comes with it
– seen Apocalyptica and Paradise Lost performing live.
– been at Peninsula festival, which actually changed my life
– met new people.. been accepted in the rocker`s small ‘community’ :) – Cotoara, Bandean, Pavel..
– regained Adi and Csabi as friends
– owning a classic guitar and being able to play Metallica`s ONE with it ( ok ok, only the beginning )
– discovered the cure for soul in music
– my back didn`t cause any trouble this year
<< - >>
– lost first love
– still haven`t found the balance between love and friendship. 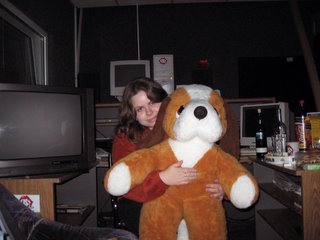 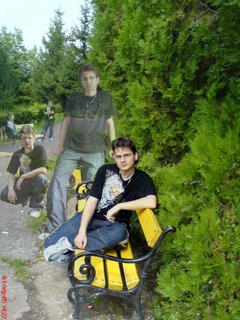 Aahahhahahahahahaha, I declare this the picture of the year.. that`s Steel, with his nose and mouth stuck on to a window in Star FM studio.. :))))

Ultraviolets in the floor. Bizzare Pub. :)

The cross near a Christmas tree. Antithesis ? ;)
‘Troubleshooting : camera isn`t functioning.
Reason : camera isn`t on.
Solution : turn on the camera.’
No comment.
So.. hmwhat ? What if Santa was so giving this year ? My folks got me a classic guitar, Adi a TV tunner and Csabi a big pooh dog.. and I mean big ! Like a meter or so. :) I would have never imagined that coming from them.. I mean, yes, we`re friends, but.. :) It means so much to me. :) Not the gifts as they are, but the fact they gave them from the heart. Thanks a lot, guys.
My Christmas tree looks awesome, the atmosphere is great, it`s snowing, but.. of course, Christmas.. started bad, with a terrible hangover from Rock Xmas event ( where I had the chance to listen to Godmode from Cluj – love `em – and Fading Circles again – adore `em !! ) and an unsual depression ( met duck after half an year at the event ). A few hours of agony, of silly questions about all the Christmas fuss ( like.. what is Christmas all about ? Why is it considered such a great holiday ? Why can`t I feel the spirit of Christmas ? What should I feel exactly ? I should be glad about what ? Singing carols about a God I don`t believe in ?, etc.. etc. ) and everything was ok afterwards, when I met with Adi, Csabi, Steel and Criss at Star FM.
Hmmm.. Christmas is nice because of other things. For example, I now have enough time to watch movies, listen some new music, write, talk to the guys on messenger, going out. It`s holiday, and on holiday everyone relaxes. :) Here are some pics I`ve noticed on my computer. :) 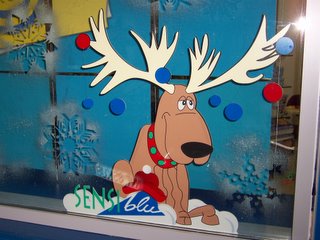 Silly SensiBlu reindeer I photographed after a Tubor Strong one Friday. Isn`t that cute ? :))

That`s Bandean Vlad Aiurel.. :)))) I wrote about him in the ‘From normal to stupid’ series.. great colleague, one of the 3 lords of rock in my class, the biggest Judas Priest fan alive.. :) In the first picture, he`s wearing the jacket he bought.. he looks so damn cool.. and in the second, well.. :))))))) I don`t know what he`s doing, but lemme tell you he is NOT peeing… hopefully :P.

Pavel.. another rocker.. you already met 2 of them. Ahahaha, that grave is in a park near our highschool.. some soldier with the same name as his is burried there.. :)))))) That picture is modified in Photoshop.. you can see Pavel`s ‘ghost’.. :)))))))

Cotoara at Peninsula.. last rocker from the trio of guys. I`m suppose to be the forth wheel. ;) 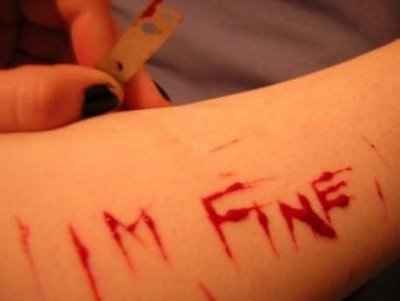