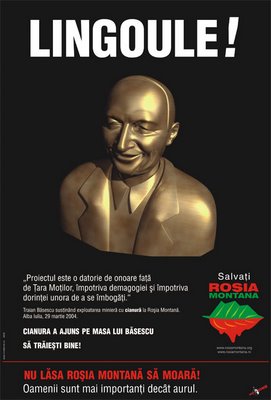 MindBomb simply kick ass, I love those guys. I hope our ‘beloved’ president won`t simply admire his shiny golden face… Asshole.
So, guess what happened on Friday ? The ass lickers asked for money again. :)))))))))))))))) What for ? Well, our math teacher is having an exam to obtain the first degree in the educational system, and some inspectors are coming to watch him teach. Guess the ass lickers are out of cigarrets again, so they told us to bring 1 RON each to buy him flowers. =)))) Surprisingly, it didn`t piss me off this time ( at least not in the beginning ), I simply started to laugh my ass out. Ioana almost choked herself while drinking water when she heard the news. :)))))) Oh and guess what ? We`re not even thinking about giving that precious 1 RON for this. :) I guess you all understand why.
Sooooo, fuck everything and everyone, I`m going away to party. Guerrillas are in town, and I`m definitely not missing that !

Vine, e aici… :))
Today I have experienced the twilight zone. ‘Hiiiiii mom, I`m in the twilight zone !’. Or should I say, like in the Johnny Bravo cartoons, ‘the zone where normal things don`t happen very often.’ ? Either way, it was and still is freaky.
The first clue of abnormality was the fact it was already 10 o`clock in the morning and mom didn`t come to rise and shine me, time to get up, you`re sleeping late again. I got up all by myself, and went to have breakfast. Suddenly, this very weird conversation began… My folks have seen some news about a satanic group who`s sending messages on the internet and teenagers kill themselves after reading them. And guess what, it happend in our country, in Sibiu, where there are 3 suicidal cases in a highschool… I was like wtf ?! Then dad told me he`s seen my book about death, which I borrowed from the library. It was like he was askin` me if I`m planning to kill myself. :) I had to make it clear that book is plain philosophy, and mom agreed `cause she read a few pages herself. Then I said that everything I read, even if it seems weirder, is out of curiousity. Then, out loud… ‘Oh for cryin` out loud, I don`t have suicidal intentions !’. Mom : ‘Don`t worry, she`s a clever kid…’ .. I don`t know how all those things have any kind of connection between them. I`m still with a huge WTF on my mind.
Moving on with the weird stuff, __hell__ ( a friend who lives in Tudor, another neighbourhood in my town ), told me it`s hail raining over there. Hail belongs to the summer, and Dambu ( my neighbourhood ) is not that far away, and here it wasn`t even raining. Oddly, again.
Then I ran into this site : http://www.altguitarbass.com/weird/ . 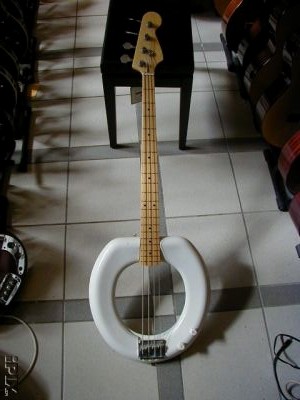 Tell me that`s not bizzare. :-S That and the other guitars there. I wonder what`ll happen next today…

I`ve found some sorth of South Park characters-generator site, where you can create your own Sout Park avatar. Of course I forgot the link to the site… it`s late and I`ve got a couple of bears ( later edit -> I meant BEERS … :D ) on bord ( just got back from the tribute to Queen and Freddy Mercury concert – I`ll tell you about it in the morning, hopefully ). Please consider it was almost 2 o`clock in the morning when I ‘conceived’ `em, so no offence. :)) 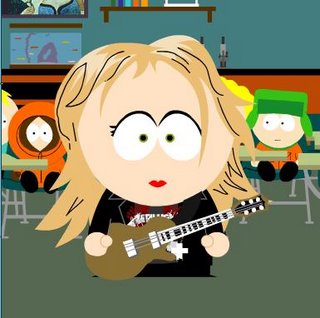 So let`s begin with… me ! You`re not right ( later edit -> and of course, I meant WRONG, not right, for the sentence to have a meaning … :> ) if you say I`m the most unrealistic one; I don`t dress only in black ( I like my jeans blue, thank you ), and I don`t have a Metallica T-shirt ( I should be ashamed of myself ). I don`t even know why I put a guitar in my hands, since we all have one. And wtf am I doing in that classroom ? Don`t even like school… :)) 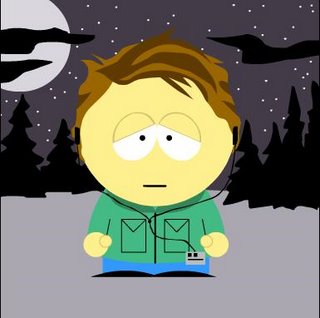 That one`s Pavel. :))))))))) He looks so pale… and he doesn`t even smoke that much. :P Well, I had a hard time finding a similar haircut, and the best I could come up with was that. He should look more Hitler-like. :> You may wonder why all the seriousness, but it`s what I had in mind at the time. Or maybe I inspired myself from his looks when he`s being tested at school. Oh, the mp3 player is an iPod… it should have been pink, like his, but… tough luck. Moreover, it should have been in his shirt`s pocket. Details, details. The landscape fits him, I think… dark and partly cloudy, with the cornered-moon… Full of deep meanings. :) 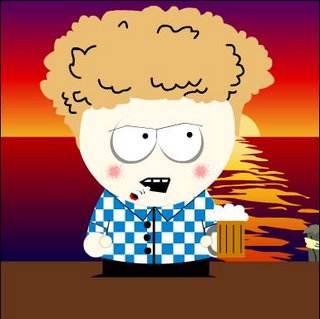 Ahahahha, Cotoara !! Tired eyes, fluffy hair, a cigarette in the corner of his mouth, frowned face, his quadriatic shirt, and of course, the almighty beer. He does like the sea, I guess. I mean Nightwish praise it a lot, I thought the ‘ocean soul’ feeling is contagious. ;)

And the last, but not least, Vlad. :)))))))))))))) God, I love myself for this one, it`s just so perfect ! I`ve placed a rocker with all his accessories` palette in a divine heaven scenery. :)))) The haircut and face are extremely close to the true appearance… :)))) The Jedi sword is absurde, but then again, what isn`t so in these drawings ?

That`s just a weird shade of the Rock Park in my class… Nevermind me, I`m not even completely sober.

I keep writing and reading, actually, doing everything in a hurry lately. Like I`m running out of time. Dunno why. But now I`m here, chilling, ready to tell you a bit of what`s been going on lately.
School is the head subject.
Today, on 8th of March, there was another special occasion for the ass lickers to ask for money; 5 RON each, to buy flowers for our beloved female teachers, that means 10. I don`t know what they imagined, we`re 27. What`s with all those money ? Oh well, I didn`t even give a coin; Ioana and a few others either. Man I`m so sick of this. Today they were complaining to our formteacher they had to give money from their own pocket to be enough because of us. I told Vlad the formstupid will ask the main ass lickers who didn`t redound, and he just said, after a short pause… ‘neaaaaah, she couldn`t’. Well I guess I know better, she actually did, during the break. She even took the list, but didn`t say anything. Oh, I can`t wait for some next class to be asked thousands of questions about this. I`ll just say I didn`t give money because I`d feel I wouldn`t be giving the flowers from the heart. And that`s as sincere as I can get. Oh, the formstupid deserves to DIE, by the way.
Another idiotical thing she did this week was to actually get a psychologist to Ionel, one of my classmates. He`s this… boor-aggresive type of guy, but pretty smart and funny, who always has the perfect line in every conversation. This year, Ionel stopped learning anything. He simply stopped. I don`t know what happened, he failed lotsa objects, but willful; I think he reached the maximum distaste a person could feel towards school. :) Anyway, I think you have to be a little weak to let yourself go like he did, but this is not the point. The formstupid ( sorry, I can`t talk different about her ) got him a psychologist, after Lobi, the Maths teacher, invented the famous by now line ‘Ionel doesn`t care’. That`s, for sure, the laaast thing Ionel would need right now. His indifference can only be cured with understanding and, well, more indifference coming from us. Especially from the teachers. It`s his downpoint, he has to overcome it alone. But do I know better than her… ?
As I was sayin`, some people really deserve to die.
Well, it`s been a while since EgoPhobia last got out, it didn`t appear in December, but a double number is out now. Joy ! :) I wrote two articles for this number, both being published ( lucky me :D ). One`s in Romanian and the other one in English. ( “Teoria nimicului şi nimicurilor” / “I’m with Depressive Hater” ).
Must say I feel pretty proud `cause Nick & Mihnea from Luna Amara have texts published in this number. I already knew about Mihnea ( that`s how I first decided to write in that e-zine ), but Nick`s poems were a surprise. I feel really proud. :)
Read up everything, this number has lotsa interesting things in it.
I call it a habit. The ‘against everything’ habit of mine. Things aren`t exactly going my way this period, and anger dominates me, filling me with energy in the night and exhaustion during the day, which is kinda fucked up, by the way. Wanna know how far it goes ?
I can barely wake up in the morning, trembling because of the lack of sleep. During a regular day at school, I almost fall asleep in classes, when I`m not with the rockers to keep me entertained. During an impressively frustrating day ( such as one with events like Andrei Morar getting beat-up and mugged, teachers giving unfair grades, colleagues yelling and being as passive and trivial as always, so on and so forth ), I can feel my heart rotting and the adrenalin rushing through my veins, resulting in anger, rage and frustration. You can`t imagine the stupid things I do in this situation, things that hurt others and eventually, me too, when I remember and think them through all over again.
First, it`s like I`m walking on clouds since school started; I can`t get used to the schedule, I daydream and do anything else but study or the homework. My room`s a mess, my life`s a mess, and it doesn`t seem to be enough to make me clean up. Both of them… I feel like a dreamy bohemian artist, who only reads, writes and plays the guitar, not having anything to do with the real world. Then, I find myself skipping classes, but without any reason besides an overwhelming rage that I just can`t take, so I jump in the bus, heading home, to lock my thoughts better in the strongbox of my head. Or, like today, I start shouting and say ugly things to persons who irritate me involuntary ( today Ioana and Cotoara… ).
At night, everything is getting more and more complex and I seem to be draining all my rage back towards myself. Then it gets lonely as hell…

It comes to me what a lonely wolf means…